Following is a post made to T@H which you will find interesting if you are considering a set of the Shimano Sweet 16 tandem wheels. 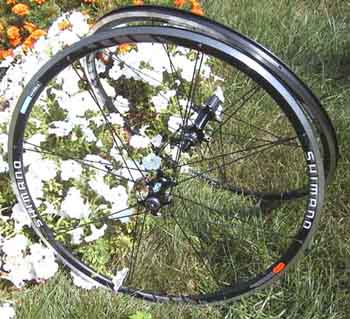 I just completed a home-grown experiment this past weekend to reveal to
myself how much difference wheels having 16, 40 or 48 spokes would make.

Searching for a constant power source, a Makita battery operated drill was
used with a bolt in the chuck which served well to turn the entire
drivetrain via the crankarm bolt.  The timing chain was removed to minimize
the motion caused with the cranks in phase.  Hmmm....  maybe it is
impossible to pedal smoothly with cranks in phase after seeing the effect of
alternating crank motion when powered by a non oscillating power source!
...but that is another topic.

A computer was hooked up to the rear wheel to monitor the maximum speed in
the chosen 55x21 gear combination.  And after several trials, it was
determined that the drill battery needed to be charged for 3 minutes between
each test in order to maintain reproducability.

Multiple trials were run for each wheel to insure consistency.

After the data was recorded, the 16 spoke wheel results were again
duplicated and verified just on the chance that our 3 minute charge time
combined with the multiple runs did not cause an accumulated change in the
battery condition.  The 16 spoke wheel was again clocked at 69.5mph, the same
as the initial test.

Any math folks on the list are welcome to jump in here and enlighten us as
to the speed increase or the increase in efficiency one can expect from
running 16 spoke wheels at speeds one would expect on "real" rides, i.e.,
15-20 mph, 20-25 mph, as compared to that of 40 or 48 spokes.

On wheel/ride compliance... nah... won't go there just yet! ;-)   .....not
until I develop a stokajoltameter that WILL quantify some things.  Not all
things are imagined.